These reflections are based on a one-year of ethnographic fieldwork that I conducted between 2017-2018 on four urban rooftops in Cairo and Alexandria, the two largest cities in Egypt. On these rooftops, women rear chickens, goats, rabbits, turkeys, geese, and sheep to feed their families and gift their in-laws. Women primarily use household leftovers and waste from nearby stores to feed rooftop animals.

These rooftops are usually located in four or five-floor extended family homes where the grandparents, parents, and grandchildren live in a few separate apartments. Rooftop rearing takes place in a country suffering malnutrition. The only affordable meat available for lower-middle and working classes is imported or frozen meat, with unknown sources and myriad suspicions around origins, nutritional value, and feed quality. The cost of rearing rooftop animals is significantly lower than purchasing meat from a butcher or grocery store. For example, while a turkey costs around $32-45, it costs less than a quarter of this amount to rear, feed, and slaughter one at home. As such, rearing animals on rooftops is how many families provide themselves with meat that they nurture, trust, and feed at home. 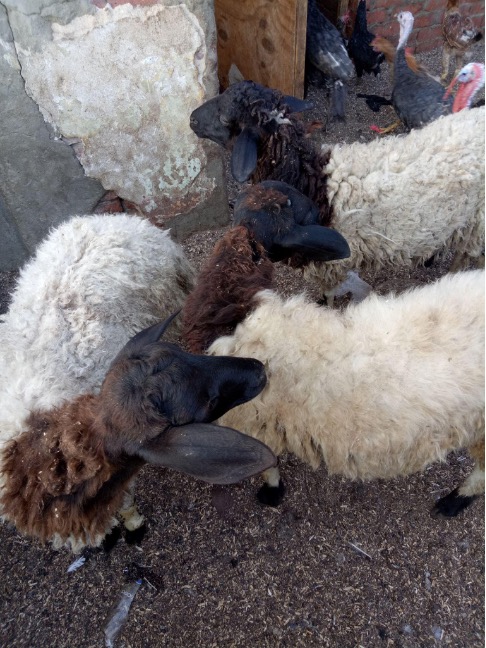 Nahed’s rooftop in Cairo, Egypt. Photograph by the author

“Everything we eat, they eat too”: The Rooftop Basket and Household Waste

As I waited for Sahar to announce that lunch was ready, I waited in the living room with Sahar’s 10-year old daughter Hana and her mother-in-law Nahed. Sahar rushed out of the kitchen and asked Hana to help her move the plates out to the living room. Rather than waiting awkwardly in the living room, I went to the kitchen and offered to help. As I expected, Sahar quickly told me that it’s Hana’s job and that I should just wait in the living room. “Or, wait,” she said, pointing to a huge basket next to the stove and asking me whether I knew what this was. Cluelessly, I told her that it seems to be a rubbish bin, but little did I know.

Full to its brim with vegetable peels, produce discards, and some cooked leftovers like rice and grains, the rooftop basket — as Nahed and Sahar call it — is the pivot through which a rooftop flourishes with life. Cooking for the family everyday, Sahar and Nahed never throw anything away. Instead, they routinely place all the peels, vegetable cores, stale bread, and other household food discards in that leftovers basket strategically located near the stove. After lunch and dinner, Sahar likewise takes all the leftovers that Hana and her sibling refuse to eat and places them in the basket. Sahar and Nahed take some leftovers from the basket and mix it with grains or fodder before going up to the rooftop to feed the animals their daily meals.

“Everything we eat, they eat too”, Nahed assures me. Unlike store-bought meat or poultry, a rooftop animal grows on a consistent and carefully controlled diet of household leftovers, fodder, and homemade immunity boosters such as onion and garlic. Predominantly, however, Nahed depends on her household leftovers to feed rooftop animals. As such, Nahed makes it clear that rooftop animals are trusted and delicious meat because they mainly eat whatever the family eats. Rooftop animals are thus seen as an extension of the family. With every fieldwork meal, Nahed assured me that I would never eat meat that is as tasty, clean, or delicious. As I devour Nahed’s freshly fried delectable chicken breasts, she asks me rhetorically, “of course it tastes good, would any butcher ever put as much effort in choosing what an animal eats?”

Beyond feeding families and providing trusted meat proteins, rearing rooftop animals also sustains ecological and social relations in lower-middle class neighborhoods. On another fieldwork day, the doorbell rang as Hana excitedly ran to check who was visiting in the middle of a weekday. Disappointed, she quickly came back to the living room and told Nahed that it was just Saeed dropping off a bag of leftovers. Sensing my confusion as to who Saeed was or why he dropped off leftovers, Nahed shared that every family rearing animals on their rooftop sets an agreement with one of the neighborhood stores selling fish, fava beans, produce, or street food. Everyday, the store owner sends meat-free leftovers to the family instead of discarding them in the overflowing dump nearby. Nahed would then add the daily store leftovers to her rooftop basket in the kitchen, adding more flavor and variety to her rooftop animals’ diets.

While the store owners never expect any money in return, there is an implicit expectation that the families reciprocate by shopping at the stores. For example, since Saeed sells fava beans, Nahed sends Hana over every Friday morning to buy fresh fava beans and freshly fried falafel for weekend breakfast. As Egypt has a dysfunctional waste disposal system, this neighborhood-based network of waste management and recycling sustains social relations, ecological wellbeing, and overall less waste in the neighborhood. As spaces of nurturance, trusted food, and waste recycling, rooftops in urban Egypt expose multilayered trajectories of food and feeding families among lower-middle class groups.