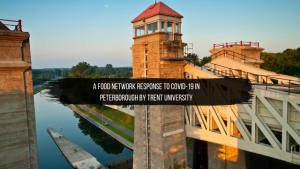 On March 19, two days after Premier Ford declared a state of emergency for Ontario, a ‘new’ food network emerged in Peterborough. It developed out of the Peterborough Food Action Network (PFAN) which, for 13 years, has promoted community food security in Peterborough City, County, and local First Nations. Maintaining the vision that “everyone in Peterborough City and County will have enough healthy food to eat as part of a long-term food security strategy,” PFAN has always welcomed anyone interested in food issues who supports PFAN’s purpose and its work to address food insecurity and promote healthy and local food. Over time, PFAN has tried to steadily increase its focus on addressing food insecurity’s roots, particularly income insecurity. However, at that point in March, PFAN could not proceed with business as usual because of physical distancing regulations, the redeployment of its vital public health representatives, and the scrambling of its members to meet the needs of their own programs, organizations, and personal circles.

Prior to the pandemic, food insecurity was already an issue for the regions served by Peterborough Public Health. In fact, 16% of local households were food insecure in 2011-2014 compared to 12% across Ontario. Furthermore, the numbers of food-insecure households with children under 18 and food-insecure households led by female lone parents were both about twice the provincial average. A staggering half of female lone parent households were food insecure. The start of the pandemic and the realization that many vulnerable community members lacked the resources to stockpile food only reinforced for PFAN members the need to take an equity approach to food insecurity.

In response, Peterborough Public Health (PPH) led this network pivot and has been coordinating the new network ever since. PFAN switched from bi-monthly in-person meetings chaired by the local medical officer of health to bi-weekly (and later, monthly) meetings by phone (and later, online) facilitated by one of PPH’s registered dietitians. The group’s purpose has been “to bring organizations and community advocates together, who are concerned about food access for vulnerable populations. The hope is to better understand current concerns, needs, and resources” (March 19 meeting notes). The priority has been to slow the spread of COVID-19 while working together to understand and address growing food insecurity among vulnerable populations. In addition to Public Health, these new COVID-19 and Food Access for Vulnerable Populations network meetings have involved groups working in the City, County, and local First Nations, and have included: food banks; meal programs; student nutrition programs; Social Services; Trent University; Community Care; food literacy, food growing, and gleaning programs; Income Security Peterborough; and community members/advocates with lived experience of poverty and marginality. While many members had already participated on PFAN, a key difference has been the presence of more food banks at the new virtual table and a greater integration of needs from  emergency food provision in conjunction with advocacy for long-term solutions to food insecurity.

Early on, the network developed three working subgroups: food access for people without stable housing or kitchen access; food access for those with stable housing and kitchen access; and advocacy regarding the roots of food insecurity and poverty (now and beyond COVID-19). Later, the new network decided to shift from formed subgroups to ad hoc groups to work on specific projects as they arose.

From March to August, a variety of themes emerged. Unsurprisingly, a sense of unpredictability developed as the pandemic became a reality. Network members were not alone in wondering about its trajectory, impact, and duration. Moreover, they wondered what might happen to the community’s food supply and food access for vulnerable people. Members tried to assess the implications of seeing demand for their programs shift, usually upward but sometimes downward. They recognized that circumstances (e.g. food shortages), regulations (e.g. provincial, municipal, and public health directives), and responses (e.g. program closures/changes, government supports) were changing quickly and that, as such, agility and flexibility would be necessary. More recently, uncertainty has extended to the implications that upcoming school re-openings and a possible second wave of the virus may have on food access.

Network discussions have revealed how COIVD-19 is compounding the struggles of already-vulnerable people. For example, physical distancing and safe hygiene practices have been challenging for people who were already homeless or precariously housed. Healthy eating has become more difficult for those who already faced challenges leaving their homes to acquire food. Those without working phones, computers, or internet have experienced the physical, mental, and emotional effects of being shut out of communications and connections — especially as programs closed or transitioned to lower-contact options. Not only has there been a realization of needs beyond food (like water, PPE, hygiene items, and mental health supports), but also of the need to balance the risk of COVID-19 with other health risks by looking, for instance, at both the protective and damaging impacts of social isolation.

Regarding program operations, the importance of volunteers has been revealed. Procedures to reduce social interactions along with the health-related decisions of many volunteers to temporarily disengage have left many organizations more short-handed than before. It has become clear that much of the volunteer workforce experiences added vulnerability to the virus, particularly as seniors. Member organizations have needed to strategize around ways to continue operating if active workers become sick. At the same time, many community members have been eager to contribute to food access efforts during the COVID-19 pandemic.

There is little doubt that local food access has benefitted from the efforts of the COVID-19 and Food Access for Vulnerable Populations network. Its members have brainstormed over shared challenges and facilitated connections between vulnerable people and needed supports/resources. They have exchanged opportunities for funding, food access, volunteer pools, as well as health and community information resources (such as mental health resources and links to broader food systems initiatives). The network has also stayed true to its advocacy roots by: writing letters to relevant politicians regarding new provincially funded emergency benefits; advocating for a Basic Income Guarantee; and participating in the Ontario Poverty Reduction Strategy consultation and City of Peterborough budget consultation. In addition, network discussions prompted a Trent University research project, From Crisis to Continuity: A community response to local food systems challenges in, and beyond, the days of COVID-19, exploring local food-related impacts from and responses to the pandemic. It has currently surveyed about 25 organizations providing food supports and about 300 members of the local community.

Peterborough provides an example from a smaller city-region food system of the resilience that can develop when communities can maintain strong networks and the commitment of a range of not-for-profit and institutional actors to addressing food insecurity. Investing in social capital and shared principles over the years has placed Peterborough in a better position for identifying needs and responding to crises like COVID-19.