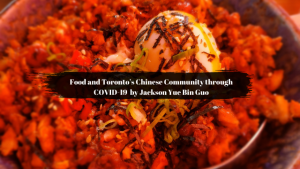 In February, the traffic flow between the Pacific Mall and the Silver Star Blvd, a Chinese food mecca for the Greater Toronto Area, could be best described by a Chinese proverb: “Carriages flow like a stream and horses whinny like dragons”. The tasty kebabs, boiling hotpots, and hand-pulled noodles sold in the mall normally drew crowds of diners from noon till night before the pandemic. Then, all of a sudden, by mid-March, silence engulfed the stores and alleys. Even the busiest restaurants shut their doors and closed their lights. “No eggs can remain unbroken when the nest is upset!” This other proverb echoed among Chinese Canadians, as COVID-19 scared the whole country and the world. But, going forward, could the pandemic provide any opportunities for the GTA’s astute Chinese-Canadian restaurateurs and food suppliers to regroup and recover? The Master of Huainan, an erudite Daoist scholar in the second century BCE left a famous story, “Elder Sai once lost a horse. His neighbours sent him consolation. Elder Sai smiled and said, ‘Who would know this is not a fortune?’ Days later, the horse returned with another.”

The creativity of ‘ethnic’ food markets in Toronto has attracted the notice of mainstream media and food studies scholarship only occasionally, and seldom in depth. The pandemic situation provides a rare opportunity to view the adaptability of the Chinese-Canadian food sector in a disrupted commercial environment. This blogpost explores how this sector has managed to deploy a strategy to function during the pandemic, largely aimed at customers familiar with Chinese-language social media tools. The rumours of possible food shortages circulating on social media if the pandemic alighted in Canada began as early as late January and early February, among Chinese-Canadians, who tend to be better informed than most Canadians about the everyday impact of COVID-19 in the affected regions of China. Although most Torontonians did not appear to be worried about the supply of fresh food, those who were well-informed about the horrendous situation in Wuhan hoarded canned foods, staples, and other food supplies. By March, the number of diagnosed patients in Canada was increasing exponentially. Rumours spread among Chinese-Canadians that all facilities and retailers would close sooner or later. At this point, Asian supermarkets such as T & T (by far the largest Asian food mart brand in Canada), Bestco and Foodymart quickly introduced new marketing tactics to accommodate the challenging business environment. Those tactics allowed them to successfully withstand the harshest days of disrupted food chains during late-spring and early-summer.

What sets apart such Chinese-Canadian supermarkets at this time was their willingness and speed in developing e-commerce apps and establishing collaborations with food delivery companies. Their apps and widgets (Figure 1) offer remarkably convenient services for users. First, they can accurately locate users via Google Maps and help them to find the nearest store. Second, the apps show detailed menus of the items on sale, ranging from fresh and seasonal foods to canned goods, bakery and dairy products. The checkout buttons lead users to a fast door-to-door delivery system. This collaboration mode innovatively combines the resources and facilities to ensure speedy and safe service. Drivers would leave the ordered and pre-paid items at the door and avoid face-to-face contact with the customer. The recent introduction of Alipay, an e-commerce transaction app designed by China’s magnate Jack Ma, allows for easy and flexible conversions between Canadian dollars and RMB (renminbi, the Chinese currency), through which various food vendors and restaurateurs have managed to gain revenue while the city is officially locked down. An interesting comparison may be made between e-commerce platforms in use among different ‘ethnic’ markets – as for example, South Asian-Canadian supermarkets, when they recently pivoted to setting up online systems, seem to have used Shopify instead of Alipay. Notably, most of the delivery companies that have tied up with these Chinese-Canadian food providers do not hire long-term employees, but rather engage university and college students on commission, who own cars of their own, and many of whom found time on their hands and a need to augment funds when they were forced to stay in the GTA over this summer. This again, is a point that requires further research.

Of course, not all Chinese-Canadian food providers were able to set up an exclusive app. Smaller merchants and restaurateurs therefore signed on with commercial apps such as GOcery, which has the advantage of being bilingual. Others have simply taken advantage of WeChat to market their products, thereby limiting their reach to consumers who were proficient in the Chinese language. These are food businesses who target a younger clientele of international students and Chinese Canadians in their twenties and thirties who are familiar with the alternative retailing functions for which WeChat can be used, as it is in China. We also find popular widgets such as CHIHUO, Toronto Diary, and Toronto Life (see Figures 2 and 3) operated by university student associations or business organizations, which update information about new foods, restaurants, and culinary fads in the city.  For instance, the screenshot below was taken in June, when wax berry, a southern Chinese summer fruit from Zhejiang and Fujian provinces was imported into the GTA during the weeks when it is seasonally available. Iced wax berry jam soon became popular among Chinese-Canadian social media users, whose widget blogs about this delicacy drew the community’s attention to this rare fruit from China and its availability in Canada despite the pandemic.

Culinary infrastructure, a key concept in studies of cross-cultural foodways that suggests transportation networks, marketplace and media resources, epistemologies, and technological inventions can significantly shape people’s consumption of food, can be usefully applied to interpret Chinese-Canadian food entrepreneurs’ pandemic operations. In fact, WeChat has served for them not only as a transaction and promotion channel, but also as an efficient knowledge-production platform. It has enabled restaurateurs to refurbish brand reputation and seize new market opportunities by sharing useful information about food and cooking at a low cost. Some entrepreneurs have operated family kitchens. These businesses are often tax-free and only accept RMB via WeChat, even though they are physically located in Canada. The screenshots below (see Figure 4) are from a WeChat restauranteur who recently bought a rice noodle store in Scarborough. Due to the pandemic, her physical store has not yet opened. She decided to operate a WeChat kitchen and promote her handmade products (including lobster fried rice, traditional sweets, and several signature dishes) by posting daily status updates.

“Without the piercing cold of the winter, there would be no fragrant plum blossom.” More than a thousand years ago, a Buddhist monk wrote this line to enlighten his disciples. In Chinese culture, plum blossom symbolizes tenacity, persistence, and endurance. As with the rest of the GTA’s restaurant sector, Chinese-Canadian restaurateurs were eagerly waiting to be allowed to reopen once the pandemic situation improved. As of late June, the City of Toronto introduced the CaféTO program that allowed restaurants to apply to operate patios with strict health protocols in place. Soon, patio umbrellas could be seen outside many suburban Chinese-Canadian restaurants on Silver Star Blvd and the Skycity Center. The CaféTO program allowed those participating restaurants to use the outdoor spaces in those strip malls to seat customers and serve food. By July-August, Chinese restaurant foods that ranged from Hong Kong style dim sum and northern kebab skewers, to Szechuan spicy dishes, were being served on the patios, rather than the normal banquet halls (see Figures 5 to 8). For now, customers of the restaurants in the Silverstar Mall can recapture the open-air food markets of their original hometowns in China, where friends and relatives are accustomed to drinking beer and enjoying kebab skewers below the broiling sun or white moonlight. The mainstream media, as well as social media bloggers who follow Chinese restaurants across the GTA, are gradually bringing to the attention of a wider public that you can now order all sorts of dim sum delicacies, from har gow to xialongbao, on a patio. However, the narrow sidewalks of some of the historic Chinatown on Gerrard East, for instance, make this a challenging proposition, which may account for the disparity of patio dining across different GTA neighbourhoods.