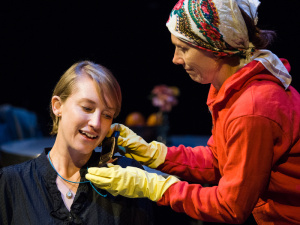 Cassandra Hartblay’s work of dramatic nonfiction, I Was Never Alone or Oporniki presents an original stage play, based on NSF-funded ethnographic fieldwork conducted in Russia with adults with disabilities. The core of the work is the script of the play itself. In a supporting essay, the author describes the script development process, and argues that both ethnography and theatre can be understood as designs for being together in unusual ways, here animated by principles of disability access and the problem of translating daily life in Russia to the North American stage.
The current phase of this performance ethnography project, funded by the Connaught New Researchers award and titled Cripping Communitas, considers how the work of staging a work of theatre accessibly offers an opportunity for aesthetic innovation, and how a critical disability studies and disability justice approach might offer new extensions of anthropologist and performance studies scholar Victor Turner's notion of communitas, the unique sense of camaraderie that emerges through the process of creating a performance, putting it in conversation with Mia Mingus's concept of access intimacy.
Image: Actors Molly Maslak and Judy Bauerlein perform the roles of Anya and Larisa in a 2016 staging of I WAS NEVER ALONE at the University of California San Diego. Photo by Jim Carmody.
Image Alt text: A close up photo: a light-skinned young person, seated, leans their head to the side, and speaks into a flip-phone style cellphone, held for her by a woman in a red sweatshirt wearing a kerchief on her head and yellow cleaning gloves. Both are light brightly in stage lighting, and a stage set, out of focus, is behind them.