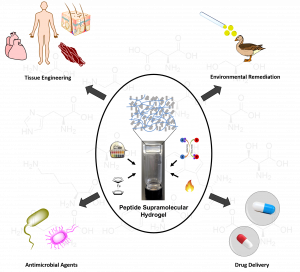 Supramolecular gels are a fascinating class of soft materials that have applications in tissue engineering, drug delivery systems, catalysis, and environmental remediation. Peptide-based gel materials are particularly attractive as they possess numerous advantages such as stimuli-responsiveness, biocompatibility, and biodegradability. In this research peptide conjugates are synthesized and explored for gelation. Their properties including strength, stiffness, elasticity, self-healing abilities, morphology, and helicity are studied. In addition, applications of these hydrogels are explored.

Self-assembly of Precursors into Prebiotic Life 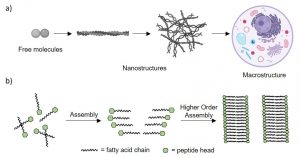 The development of complex biological systems begins with the self-assembly of amphiphilic molecules, and is driven by supramolecular forces as well as spontaneous molecular recognition. This self-organization is fundamental to the origin of life, yet the mechanism of progression from a simple molecule into the complex life form of a cell is still unknown. Here, we aim to elucidate the assembly pathways of short peptide-fatty acid conjugated amphiphiles into higher order structures, to further uncover the prebiotic evolution into life.

Carbon dioxide (CO2) is an environmentally harmful greenhouse gas that is present in abundant quantities in the Earth’s atmosphere. Due to the stability of its structure, it is notoriously regarded as an inert molecule that will only react under harsh conditions such as high temperature or pressure. Here, we explore the electrochemical reduction of CO2 to value-added materials is a sustainable and potentially profitable way to curb greenhouse gas emissions.

In cellular communiction, many enzymes and receptors are switched “on” or “off”, in other terms “phosphorylated” and “dephosphorylated” by protein kinases. The nicotinic acetylcholine receptor (nAChR) alpha7 subunit is responsible for cellular acetulycholine regulation and a major target for Alzheimer’s disease, schizophrenia, Parkinson’s Disease and cancer. Phosphorylation is thought to be a major cellular regulator for the nAChR but has never been established for human. Here, we use electrochemical and biological techniques to explore the phosphorylation of the subunit. 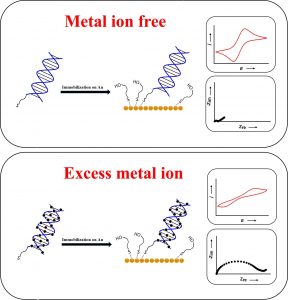 DNA remains a fascinating biomolecule studied in many areas of current research. In particular, the interactions between DNA and metal ions have received enormous interest. In this research, the thermal stability and conformational changes of DNA with different stoichiometric metal ions are studied by ultraviolet and circular dichroism spectroscopy. The properties of thin films of DNA can be studied on gold surfaces using electrochemical and spectroscopic tools in the presence of a redox-active probe. We also study the change in structural and charge-transfer properties before and after metal mediation into the DNA which can be used in developing electrochemical sensors for pathogen detection