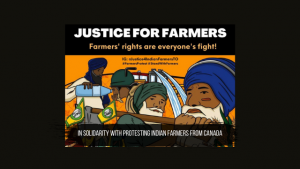 This December, the Indian Government is putting into effect legislation that has the potential to drastically affect the livelihood of farmers all across the nation. Protests are currently being held by Indian farmers in opposition to the effects of the legislation, as they see the forthcoming changes as a devastating step backwards from their collective rights.

Organizations from around the world are showing their support, and here in Canada, the National Farmers Union (NFU) has released a solidarity statement as well as the background information below.

Backgrounder to NFU statement in solidarity with Indian farmers From:https://www.nfu.ca/backgrounder-to-nfu-statement-in-solidarity-with-indian-farmers/

Why are India’s farmers protesting?

India has 164 million farmers, and many have small farms where they grow food to feed themselves and sell locally to feed their communities. Over half of India’s workforce is involved in the agriculture sector. Hundreds of thousands of farmers are protesting impending changes that will result from three controversial laws. Farm leaders have been in talks with government, demanding that these laws be repealed. Tens of thousands of farmers are in New Delhi itself, and more camped out around the city, blocking entrances. Protests are occurring all across India, with the support of non-farmers in other sectors such as transport. On December 8, the farmers called for a peaceful national general strike in support of their demands.

In June 2020 the Indian Cabinet put forward three controversial agriculture reform bills in conjunction with its suite of COVID 19 measures. In September, these bills – The Farmers (Empowerment & Protection) Agreement of Price Assurance and Farm Services Bill, The Essential Commodities Act (Amendment) Bill and Farmers’ Produce Trade and Commerce (Promotion and Facilitation) Bill – were passed by the Indian Parliament in a rushed process, without allowing for extended debate or careful examination by a committee. The final vote was conducted by voice rather than ballot, making it impossible to have a clear count of the votes. The bills will become law once they are approved by President Ram Nath Kovind, which is expected to happen in December.

The Farmers (Empowerment & Protection) Agreement of Price Assurance and Farm Services Bill – This bill allows for direct contracting between farmers and buyers prior to sowing, but does not require these contracts to be in writing, does not penalize companies that fail to register their contracts, and does not set a minimum price. The farmers can thus be left with no recourse if terms of the contracts are not fulfilled.

The Essential Commodities Act (Amendment) Bill – This bill removes all limits that have, until now, prevented companies from hoarding basic food items including cereals, pulses, oilseeds, edible oils, onions, and potatoes, even in the event of war, famine or natural disaster. This change was made at the request of food processing and food exporting corporations.

Farmers’ Produce Trade and Commerce (Promotion and Facilitation) Bill – This bill deregulates trade by allowing farmers to sell outside of their own state’s Agricultural Produce and Livestock Market Committee (APMC) markets, and prevents states from collecting fees from the markets to fund their operation. This will allow corporations to set up their own, unregulated markets.

Which powerful corporations stand to gain?

Some of the same multinational food, agribusiness and technology companies active in Canada are also active in India: including Bayer, BASF, Dow Dupont, Nestle, Coca Cola, Pespsi, Amazon, IBM and Microsoft. Some of the large agribusiness corporations are also Indian, such as Tata, Bharat Group, Atul, and Nuziveedu Seeds.

Why does this matter to Canadians?

If allowed to go into effect, these laws will increase the power of the world’s largest agribusiness corporations. It will embolden them to demand similar changes in other countries. The ability of large corporations to force down prices to Indian farmers and to demand adherence to corporate priorities as a condition of making a living will affect farmers around the world.As Canadians and fellow farmers we recognize the harm that the Indian laws will do to Indian farmers and their families. We want to live in a world where human lives are respected, where people can democratically shape their future together, carry forward their food cultures intact, and have hope that our children will be able to live well as farmers if and when they choose to.We are stronger when we act together, whether it is by marketing our products or standing up for our rights.

Information brought to you from the National Farmers Union. For more information about the NFU and their work, please visit their website: https://www.nfu.ca/