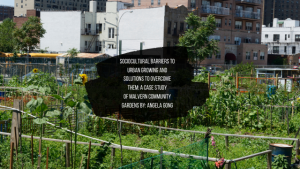 How can urban growing reach more people? Who is at risk of being excluded from urban agriculture initiatives? How can community and municipal leaders identify and remove barriers to accessing growing space? In the process of implementing equitable agricultural initiatives in the city, these are the questions that need to guide decision-making, to ensure that all populations and communities can reap the benefits of urban growing. The Malvern neighbourhood, located in the northeastern corner of Toronto, is an example of a diverse community of individuals from over sixty cultures, who regularly come together to engage in equitable neighbourhood improvement. Residents work to make positive changes through the Malvern Food Security Workgroup (MFSW), which organizes local festivals, workshops, and community garden events to solve and address food security concerns in the neighbourhood. MFSW collaborates with the three Malvern community gardens: Neilson Park Community Garden, Littles Road Community Garden, and Blackwell Children’s Garden. The two city-run gardens, Neilson Park and Littles Road, are tended by approximately thirty-five members, numerous community volunteers, and five garden leads.

The Malvern community gardens play an important role in providing fresh produce to local food security initiatives, such as Malvern Eats and a local mosque’s soup kitchen. However, the COVID-19 outbreak and associated closures in Ontario interfered with the growing timeline and procedures for community gardeners in the city. In preparation for garden openings, Toronto Parks, Forestry, & Recreation installed handwashing stations and signage in the gardens to highlight physical distancing measures and cleaning protocols and restricted participation in the garden to only five individuals at one time. The Malvern gardens took further health precautions by restricting access to certain tools and compost. Garden leads and urban growing organizations, including Toronto Urban Growers, FoodShare and Garden Jane, led webinars throughout May in order to inform members about these measures and address any questions.

When the Malvern Community Gardens were finally opened in late May, gardeners were a month behind on cleaning the garden beds and preparing for planting. While the gardeners were able to dedicate extra effort and plant everything within two weeks of reopening, many challenges remained. Several senior and at-risk gardeners opted not to return in their usual capacity for this growing season, according to Randy Bhagwan, Malvern Garden Lead and Communication Coordinator of the Malvern Food Security Workgroup. Bhagwan describes an instance where one senior gardener “stopped by the fence, six feet away and had a conversation with me, and I know he wants to be involved but he can’t.” However, even without being physically present in the garden space, gardeners who were highly active in the past can take on a “garden advisor” role when stopping by for a physically-distanced talk, and be recognized for their contribution.

Gardeners at Malvern have also contended with communication issues and increased tensions during the pandemic between the different cultures that predominate at each community garden. At Littles Road, more than half of the gardeners are South Asian, and the remaining population come from Caribbean and European backgrounds. In contrast, at Neilson Park, there is a relatively even mix of Caribbean, South Asian, and European gardeners. Due to a language barrier, a misunderstanding ensued when gardeners were talking about the virus, causing a false alarm that a gardener had been diagnosed with COVID-19. The garden leads then had to email members letting them know about the potential risk and restrict access to the garden and tools for two days before determining that the gardener had not contracted the virus. Bhagwan cited this situation as an example of rising tensions in the community and society as a whole, saying, “that was kind of a scare for us to realize we can’t take our foot off the gas, [as] things can happen at any moment.”

This miscommunication revealed another underlying issue in community gardens that transcends the pandemic—governance and land security. After learning about the potential diagnosis, the gardeners could have asked the City to investigate, since the City is generally responsible for enforcing regulations. However, Bhagwan stated that “our gardeners prefer to handle things within house, because the scare always is that if we involve the city too much there are risks that they might just take the space away from us.”

Bhagwan further describes how the pandemic highlights spatial barriers to urban growing. As a large and relatively spread-out community, some Malvern residents face difficulty accessing transit and walking spaces. During the pandemic, people are potentially exposed to the virus at numerous points in the process of obtaining food. Individuals may need to wait for the bus, utilize public transit for extended periods, wait in line at the grocery store, shop for their food, then utilize public transit once again on the way home. “Because of that, more people are trying to figure out, how do I [access food] without having to deal with these lines? People are now paying more attention to what they can do on their own.” However, while interest in growing has increased, there is a lack of education surrounding how to grow and harvest your own food. Governments allowed community gardens to open on the condition that the focus would be on food production by garden members, but no social or educational events were permitted. Gardeners were no longer able to host workshop days for community members to learn about growing food.

Malvern Community Gardens has come up with a variety of potential solutions to these challenges for urban growing. In order to help senior and at-risk gardeners to continue growing, garden members have helped them plant crops at their homes. The garden leads, who come from a range of backgrounds and speak languages that represent the community, are well-positioned to resolve miscommunications. The Malvern garden leads are also working to find ways to include individuals outside of the dominant culture, following the example of a Scarborough community garden coordinator who “learns about their culture and implements things from their culture in the [garden] space” so they also feel that they belong there.  Bhagwan notes that “sometimes gardeners think they’re talking about two different things where they’re really talking about the same thing.” Establishing signage around the garden that says the name of each plant in different languages can help to reduce miscommunications related to growing and harvesting of plants. Signage is also welcoming for casual passersby. “Signs that are large enough for people who will walk into the park to read in their languages allows everyone in the community to know this is a space for everyone.” In the shorter term, Bhagwan and the other garden leads are looking for ways to engage and educate the general public during the pandemic, such as setting up tables in front of the garden to put out produce and facilitate conversations with non-gardeners about urban growing and the urban agriculture movement.

More broadly, in order to address issues such as transportation and land security, Bhagwan suggests that community gardens require more support from the City. “In order for this industry to grow, we need to see more councillors and city leaders focusing on [these areas as more than just] a place for people to spend free time.” Indeed, the City and Province initially closed community gardens because they were deemed a “recreational service”, for aesthetic value and casual enjoyment. However, for those who are actually on-site and growing, the community gardens have greater importance for food security and physical and mental health.

So how can we motivate greater recognition of non-recreational functions of community gardens? Bhagwan highlights environmental sustainability as an important point for expanding urban growing. “Gardens and parks are great for retaining water to prevent storm runoff. Gardens on rooftops are great for cooling and heating buildings.” Furthermore, community gardens are a heat island mitigator, encourage local species and pollinators to thrive, and reduce ‘food miles’ by closing the distance between production and consumption.

Click here to read more about the Malvern neighbourhood.

Click the link below to read an article from the Spring 2013 edition of the neighbourhood newspaper about the inception of the Malvern community gardens.

Special thanks to Randy Bhagwan, for taking the time to speak with me and providing photos, and Rhonda Teitel-Payne, for her guidance and feedback in writing this article.