The facility provides state of the art research and teaching laboratories facilities that enable discovery and provide an outstanding platform for the next generation of undergraduate and graduate students in a world class teaching and research environment.

The building has continued the expansion and animation of Military Trail as outlined in UTSC's Master Plan. The building will be built with sustainable technologies and methodology that are targeting LEED Gold designation.

The ESCB has been built with a number of energy efficient design features which reduces its energy consumption. The ESCB achieves an annual energy reduction of 54% in comparison to a building that was constructed to a marginally compliant standard. The building requires a significant volume of ventilation air due to the fume hoods in the lab wing. To minimize the amount of energy required to condition this large volume of air, a series of earth tubes were constructed. These concrete tubes draw in fresh air from the outside, and supply an air handling unit located in the basement of the building. Because the ground is a relatively constant temperature, these tubes act as a passive heat exchange system, tempering the air before it enters the building. This reduces the amount of conditioning energy, further reducing operational costs.

While natural daylight and a view to the outdoors are healthy, too much glare can be uncomfortable and annoying. In order to achieve a balance, all glazing has been treated with a frit pattern that helps break up direct sunlight and glare. Additionally, the building’s vertical fins also act as solar shades, helping to reduce the low-angle sunlight during the early mornings and late afternoons. Both the frit and solar shades also have an additional benefit, as they help reduce the potential for bird collisions by presenting a more ‘solid’ surface, rather than transparent glass.

Did you know that the City of Toronto has a mandatory Green Roof Bylaw? All new buildings built in Toronto require a minimum amount of roof area to be planted with vegetation. The green roof on the ESCB helps to keep the building cooler during the summer, and helps reduce localized heat-island effects.

To reduce the dependence on fossil fuels and encourage alternative forms of transportation, a series of electric vehicle charging stations have been installed in the neighbouring parking lot. These stations are available to current or future owners of electric vehicles for a top up while on campus. Although currently only available to the students and staff of the ESCB, the University will be investigating the possibility of adding additional spaces in the future. Contact Parking Services for more information.

Studies have shown that the average temperature in urban environments is warmer than the surrounding non-urban environment due to heat buildup as a result of both dark surfaces and structures with a large thermal mass. This can cause fluctuations in the surrounding ecosystem, including altering wind and rain patterns, as well as poorer air quality. To reduce this effect, the building’s roof is a mixture of green, vegetated roof, as well as a white reflective surface. The surrounding walkways and other hardscaped areas have been paved with a light-coloured concrete, further reducing the absorption of heat.

To reduce the amount of potable water used for irrigation, rainwater that falls on the roof is directed to an underground cistern tank where it is stored. Between rain events during the summer months, this captured rainwater is used to irrigate the landscape. This helps conserve water during the dry months of the year.

All components of the building envelope have been designed with energy efficiency in mind. The glazing of the building incorporates thermal breaks in the frames to reduce thermal bridging, inert gas between the panes to reduce convective losses, and a low-emissivity coating to reduce passive heat gain. The walls and roof have been designed with additional insulation, as well as an air tight barrier that reduces air leakage. Additionally, a series of water and air intrusion tests were performed both in the respective factories as well as onsite to ensure that each component functions both independently and as part of the overall envelope.

When it rains, vegetated and natural surfaces absorb the majority of rainwater in a natural, ecological process. When these surfaces are replaced with parking lots, buildings, and other impervious surfaces, rainwater is typically channeled through a series of underground pipes and sewers to either a treatment facility, or more commonly, directly to a receiving lake or river, increasing the risk of pollution, erosion,and flooding. Both the ESCB and neighbouring Instructional Centre, however, channel all rainwater to an infiltration gallery, which allows this water to be gradually absorbed back into the ground and eliminates the impact on receiving bodies of water or treatment facilities.

The ESCB has implemented multiple strategies to help reduce reliance on cars. In order to promote commuting via bicycle, a unique sheltered bicycle storage area is available for cyclists to make use of, along with a shower facility and changing room. 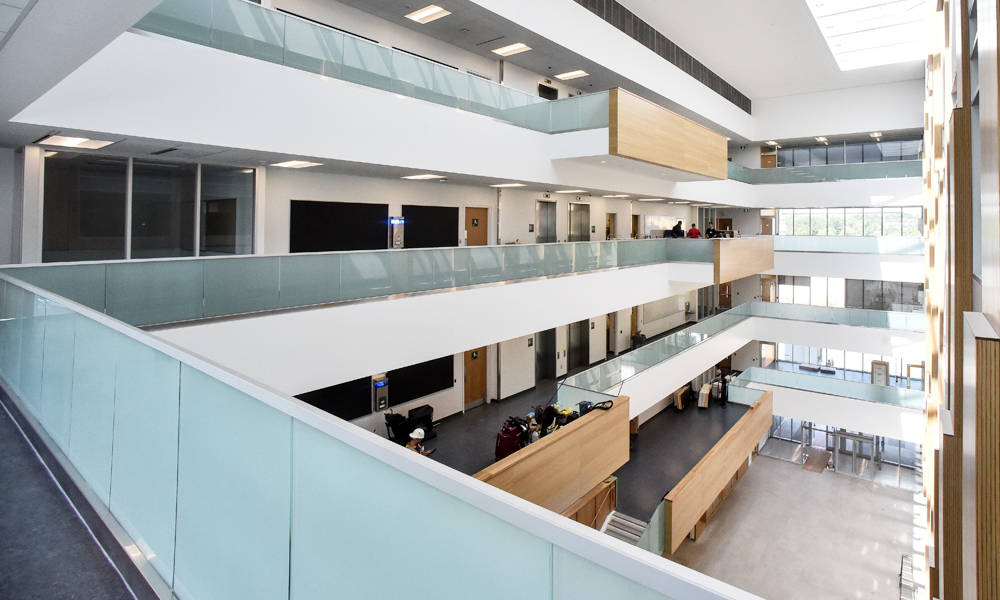 Construction activities can impact on the health of future occupants. To mitigate this, the ESCB followed a rigorous program of IAQ prevention, including protecting ventilation equipment from dust, protecting absorptive materials from fumes and moisture damage, and ensuring a clean workplace throughout construction.

As part of the energy efficiency strategy for the building, all lighting is state-of-the-art Light-Emitting Diode (LED). LED fixtures are typically more efficient with less of an environmental impact than other types of lamps, such as compact fluorescent or metal halide. Used in combination with occupancy and daylight sensors, these fixtures significantly reduce the amount of energy consumed by the building.

Another key feature in the lighting strategy, is the use of natural daylight. The use of the atrium skylight allows daylight to be brought into centre-zone office spaces.

While VOCs and other emissions are usually bad, some are worse than others. Excessive exposure to formaldehyde has been connected with respiratory issues, as well as irritation of the eyes and other organs. Even worse, urea-formaldehyde, a derivative of formaldehyde, off-gasses at room temperature and is commonly found in furniture and other wood-based products. To minimize exposure, all composite wood in the building, including millwork, doors, and acoustic panels, do not use urea-formaldehyde during the manufacturing or installation process, but instead use a less harmful alternative or are certified as ultra-low-emitting-formaldehyde.

Water conservation is becoming increasingly important to everyone, especially in areas with low precipitation or diminishing supply. Even in areas with access to clean water, conservation is to be encouraged, as it reduces the costs and burden on local treatment and purification systems. To conserve water, low-flow plumbing fixtures have been provided for all toilets, urinals, lavatory faucets, kitchenettes, and non-emergency showers. Combined, these are anticipated to save over 35% annually compared to conventional fixtures.

Many factors can affect the thermal comfort within a building, from simple temperature to humidity to drafts to the number of sweaters you’re currently wearing. To provide a comfortable indoor environment, the design of the heating and cooling system has accounted for a variety of these criteria. You can help with this as well! Make sure all thermostats aren’t blocked by furniture or jackets. Close the windows during inclement weather. And try not to sit directly below an air grille.

Volatile Organic Compounds, or VOCs, are carbon compounds that off-gas at room temperature, sometimes for years after being installed! These compounds, often found in liquid products such as
adhesives, sealants, paints, and coatings, have a negative effect on both human health and the environment. For this building, all liquid products used during construction comply with some of the most stringent maximum emissions criteria, improving occupant health.

For the first twelve months of actual operation, the building’s energy consumption will be measured and compared against a theoretical energy model that was used during the design process. Because each energy-consuming system, including heating, cooling, and lighting, is metered and tracked separately, this allows for any discrepancies to be identified and corrected, ultimately optimizing actual energy use and minimizing cost.

Earth tube technology takes advantage of the constant temperature of the earth beneath the surface. Even in the coldest or hottest times of the year, the ground temperature stays constant,varying between [2 and 5] degrees. When air is drawn through these tubes, it is partially conditioned, meaning the building systems don’t have to work as much (or spend as much energy!) to condition the building.

The design of this system was more complicated that originally anticipated! After conducting computational fluid dynamic modeling, the design team realized that the system’s effectiveness could be greatly improved by adding a series of baffles inside the concrete tubes.

Because of the large number of fume hoods, a custom ventilation strategy had to be designed in order to meet the needs of the occupants as well as the equipment. Fresh, conditioned air is introduced to the administration wing of the building. It is then circulated through the atrium to custom air handling units, which add additional fresh air and supply this mix to the lab wing. This air is then exhausted out through the fume hoods, along with any chemicals or pollutants, ensuring that the ventilation for the occupants is of the highest quality.