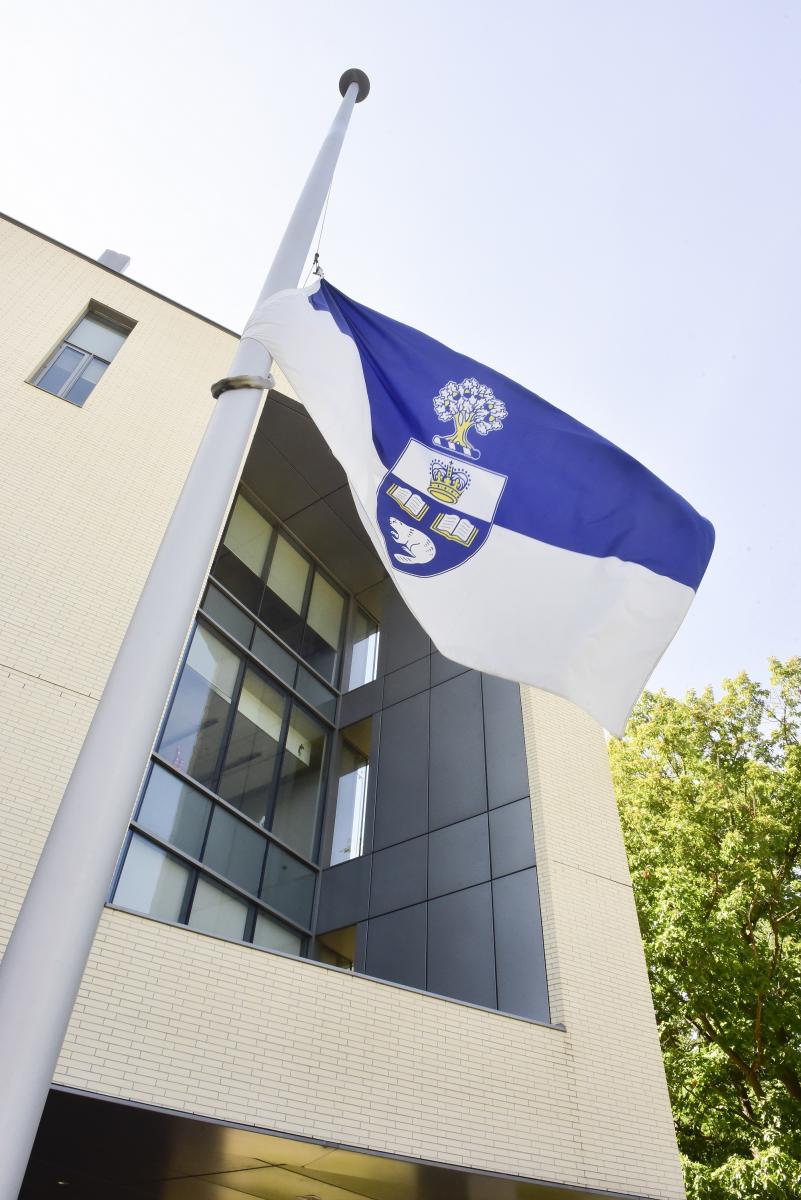 The Office of Ceremonies & Events is responsible for all aspects of the use of and the lowering of the Canadian and University flags on campus as required.

About the Lowering of the Flag

The University of Toronto Scarborough has three main flags in three locations on campus.

The Canadian flag is located atop of the science wing (SW), and is subject to specific protocol as dictated by the Canadian Government (Canadian Heritage).

The Ceremonies Office arranges for the lowering of the flag for events such as the passing of a member of the campus community and occasions of national significance.

Effective April 23rd, 2020, all flag lowering announcements will be posted here. Notices will no longer be sent to campus via email.

The University of Toronto flag will be lowered to half-mast on all three campuses on Friday, July 17, in memory of George Ronald (Ron) Williams, former Principal, UTSC

The U of T Scarborough community is mourning the loss of George Ronald (Ron) Williams, former Principal, UTSC, and Professor Emeritus, Department of Biochemistry and Institute for Environmental Studies, University of Toronto, who passed away recently. Williams was the sixth Principal of Scarborough College, from 1984 to 1989.

“I was chair of what then was the Division of Humanities when Ron was Principal,” says Wayne Dowler, Professor Emeritus, U of T. “I still feel the warmth, congeniality and sense of cooperative enterprise that he fostered.”

Williams cared deeply about the college.

“He was generous in giving it his attention,” says Eleanor Irwin, Associate Professor Emerita of U of T Scarborough. “He amazed me with his shrewd knowledge of all the faculty.” When someone was needed to serve on a committee, she says, Williams would go down the list of faculty and identify the right person with suitable interests and abilities.”

Joan Foley, Williams’s immediate predecessor as principal, says Williams cared for students as much as faculty. “While promoting research and scholarship as Principal, he was also a strong advocate for students, particularly supporting their need for a student centre,” she says. This support was essential to the eventual construction of the Student Centre in 2004.

Williams chaired the Department of Biochemistry from 1970 to 1977, growing the department and creating an environment to help students to flourish and research to thrive.

“Ron Williams was a dear and lovely man, always positive, interested in all the world has to offer,” says Paul Gooch, Chair, Division of Humanities, 1977-1982. “He had the mind of a scientist and the heart of a humanist.”

“The University of Toronto Scarborough community is saddened by Prof. Ron Williams’ passing. While he is no longer with us, we will continue to cherish his many contributions to our campus and to our institution, as a scholar and a leader. These are indelibly imprinted in the history of this campus, because the foundation that he laid, with his vision and through his accomplishments as Principal, has enabled us to become the campus that we are today, and for that we remain very grateful.”   - Principal Wisdom Tettey, U of T Scarborough

Under Williams’ watch, undergraduate instruction in biochemistry for Arts and Science students was expanded to include students in disciplines other than biochemistry, as well as larger numbers of biochemistry specialist students. In fact, during his tenure as chair, on three occasions, members of the department received Canadian Biochemical Society Ayerst (Merck-Frosst) awards. Williams combined his passion for biochemistry with concern for the environment and, in 1996, he published The Molecular Biology of Gaia, about the stability of the Earth’s environment.

“He had a wide appreciation of the academic subjects offered at the college and was particularly supportive of the performing arts. He attended college concerts, plays, and art exhibitions,” says Irwin.

Williams’ devotion to the campus continued even after his retirement. He maintained contact with many of his former colleagues, both those at Scarborough campus and elsewhere at the university.

Williams and his wife, Joyce, raised three children; Geoff, Glynis, and Tim. He was grandfather to Jeremy, Dave, and Jano, and great-grandfather to Nia and Lila.

To coincide with a private memorial ceremony for family and friends, the University of Toronto flag will be lowered to half-mast on all three campuses on Friday, July 17, 2020.

The More Colour, More Pride flag and the Trans flag will be flown on campus to celebrate Pride at UTSC.

As we celebrate Pride Month we are thinking of our trans and queer students, many of whom are experiencing increased isolation and are away from the communities that most support them. We are also thinking deeply about the Black Trans & Queer people who were instrumental in the Stonewall Riots. As we are unable to celebrate and learn together as we normally would, we encourage everyone to learn more about the Stonewall Riots and the Toronto Bathhouse Raids, which benefited from the actions and legacy of the Civil Rights Movement.

Contact EDIO@utsc.utoronto.ca with any questions about upcoming Pride initiatives at UTSC.

More Pride activities can be found here: U of T Virtual Pride Calendar

University of Toronto flag at half-mast on Friday, May 15th, in memory of Enid Lawson

The University of Toronto flag will fly at half-mast on Friday, May 15th, in memory of Enid Lawson, who passed away on April 11th, 2020.

Enid began her career at UTSC in 1973, serving in several positions, including the Assistant to the Associate Dean until her retirement in 1998. Following her retirement, she regularly visited the campus to support such events as the Watts and Snider lectures, and in recent years, the Pub at the House along with many other retired colleagues.

Enid will be warmly remembered by her many friends from the University of Toronto for her wonderful sense of humour.

The National Day of Mourning, officially recognized by the federal government in 1991, is held annually on April 28 in approximately 100 countries around the world and has been adopted by the AFL-CIO and the International Confederation of Free Trade Unions.

According to the Canadian Centre for Occupational Health & Safety, the most recent statistics from the Association of Workers’ Compensation Boards of Canada (AWCBC) indicate that in 2017, 951 workplace fatalities were recorded in Canada which represents an increase of 46 from the previous year.

The Canadian flag on Parliament Hill will fly at half-mast as well as those of businesses and other organizations across the country.

The University of Toronto will participate in this National Day of Mourning by lowering the flags in various locations across each campus and through this act affirms its commitment to the promotion of health and safety for all members of the university community and to the provision of a safe and healthy work and study environment.

The University of Toronto flag will fly at half-mast on Friday, April 24th, in memory of Professor Ian Brown who passed away on March 24, 2020.

Through his distinguished scholarship and dedication to academic excellence, Professor Brown leaves a remarkable legacy in the Department of Biological Sciences, and across the University. We are grateful for his contributions to the academic mission, notably, as founder of the Centre for the Neurobiology of Stress, and a Canada Research Chair in the Neurobiology of Stress.

Professor Ian Brown will be warmly remembered by his many friends and colleagues from the University of Toronto and the wider neuroscience community.

The family has opted to hold a private memorial service.