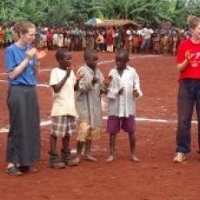 In communities disrupted by conflict, oppression and disaster, ensuring health and wellbeing is a major challenge. Stephanie Bouris, an IDS Co-op alumna, has found her niche in researching and promoting health in transitory communities around the world. Her view of health goes beyond simply the absence of disease – instead, Bouris supports a definition of health that includes physical, mental and social wellbeing that starts with building healthy communities.

Bouris’s dream was always to work in the medical field, but she’s taken an unconventional route to get there. Inspired by a volunteer exchange with Indonesia and the Philippines through Canada World Youth, Bouris chose the IDS Co-op program over a more traditional health sciences field. The intimate size of the program, and the ability to customize her B.Sc to include courses like organic chemistry, were major draws to the program.

Despite the challenging course load, Bouris was active on campus outside class time. She became a residence advisor in second year and ran the residence Academic Mentoring Program. Along with other IDS students, she helped start the IDS Students Association and raised funds for a World University Service of Canada refugee student to attend UTSC.

Bouris describes the “amazing lifetime bonds you make with your classmates” in the IDS Co-op program. “To be affiliated with the University of Toronto and have only 13 people in your program – that’s pretty amazing,” she says. “They’re all people who share common interests, values and strong connections with social justice.”

Health on the move

IDS gave Bouris the opportunity to put her health philosophies into action through her co-op placement in Kasulu, Tanzania.  In her role with Olympic Aid, now known as Right to Play, Bouris relied on some unconventional tools: frisbees, soccer balls, skipping ropes and air pumps. With these in hand, Bouris coordinated physical recreation in four camps where 200,000 refugees from Congo, Rwanda and Burundi lived.

Bouris snapped a picture of children playing in an Olympic Aid activity while on placement (2002).

Working with teachers and coaches to integrate games into their programs prepared her well for future overseas postings. She applied the skills she learned in the IDS Co-op program’s project management class, including proposal writing, program evaluation, budgeting and preparing lesson plans for local volunteers in their efforts to strengthen their communities.

These are skills she still uses every day in her global health career, first as a program officer at Right to Play in their Toronto-based headquarters, then at the Red Cross in Switzerland, to develop guidelines for their work with local communities. She then joined the Elizabeth Glaser Pediatric AIDS Foundation in Rwanda.

Bouris now works in her ‘dream job’ as the national coordinator of a research program out of McGill University focused on international migration and its impact on maternal and child health. The Migration and Reproductive Health Research Program looks at the health needs of newcomers to Canada during and after pregnancy and childbirth. Furthering her interests in maternal child health and migration, Bouris certified as a birth support doula. She volunteers with low-income migrant women during their pregnancy and birth, and helped create MotherWit Doula Care.

Foundations for an open mind

Bouris believes that the IDS Co-op program – through a combination of its interdisciplinary course load, the co-op placement, and the caliber of students it attracts – challenged her to step outside her comfort zone. “The IDS Co-op program attracts people that have an open mind, and then opens it further,” says Bouris. “The IDS program has provided me with a solid foundation for my career and life-long friendships.”