On Tuesday 27th, the CCDS had the honour to receive Dr. Lori Hansen on a talk about Development as Solidarity. With longstanding experience in Nicaragua, Dr. Lori guided a participatory talk about the intersectionality between Development & Solidarity; highlighting the possibility to reduce tensions between the critical side of International Development Studies and real life interventions.

Her experience as an activist and academic has lead her to stay involved in several joint advocacy groups and activism abroad. She has been involved in several projects related to health and epidemiology, gender & health, fair-trade, the effects of mining on communities, and education. During her years of fieldwork, Dr. Lori has been able to combine kindness, intellect, and development in a way that is fully oriented towards the community. But most importantly, in a way where she understands her positionality and responsibility.

This was seen as she lead the seminar. Instead of presenting the information she had prepared in a formal setting, Dr. Lori chose to engage everyone in the room through a reflective activity. Without knowing what to expect, and with attentive eyes, we followed. The activity consisted primarily of representations, observations, and interpretations. Dr. Lori asked four volunteers to step out of the room and gave each a lens through which to interpret the setup that she was meanwhile preparing in the room. Being one of those four volunteers, I was clueless as to what to expect, and with intrigue, stepped back in the room trying to catch as much detail as possible. 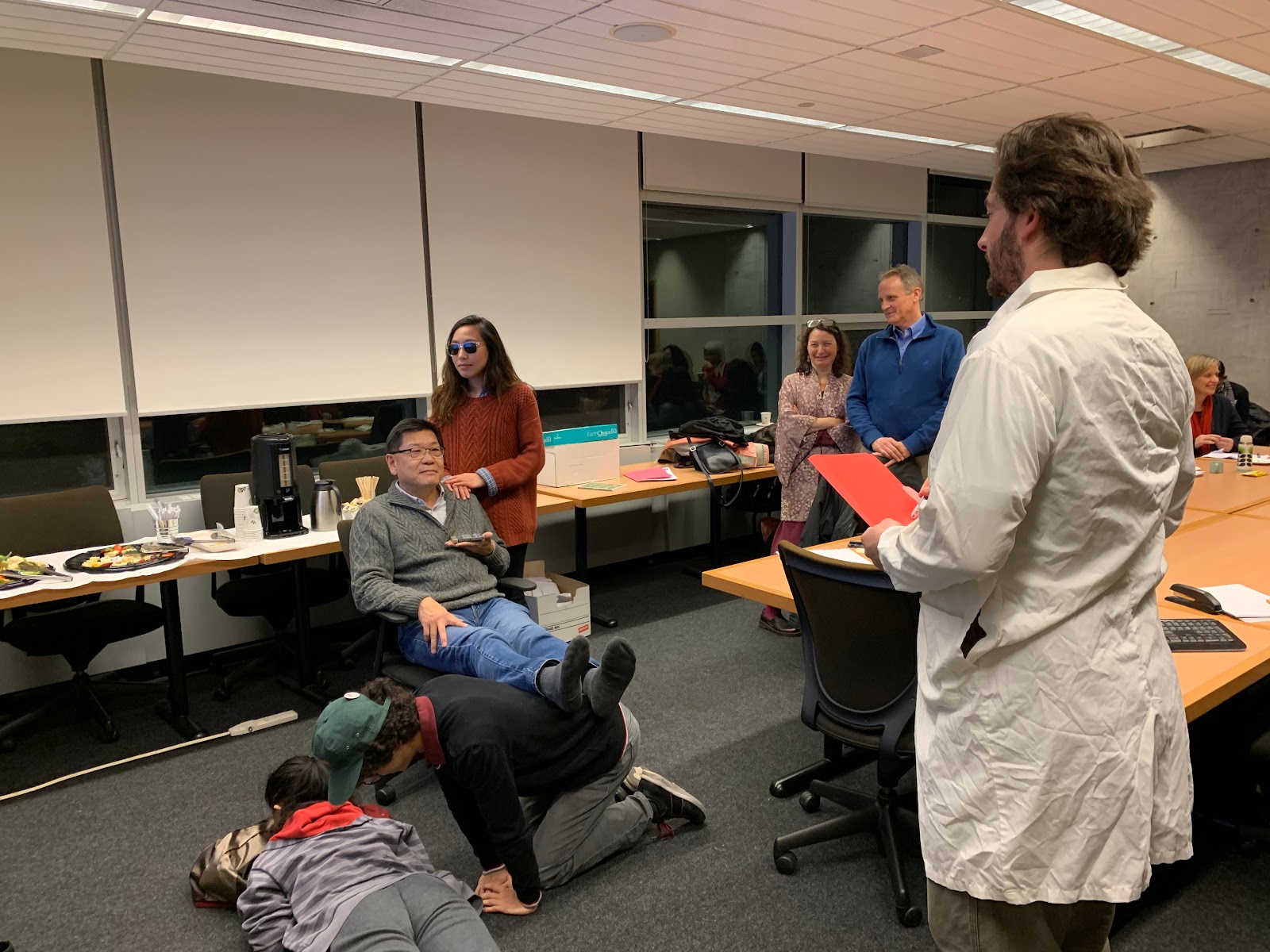 The statue I encountered was a chain of relationships, where each individual imposed their presence in a decisive manner, and even without words or sounds, it was easy to understand the power relationships put in place. The rest of the exercise developed in a very natural manner, where we all shared our observations and tried to make sense of what was going on. The biggest point we came with, after some discussions, was that the ones in power had to do less effort to change positions and be in a more comfortable place, whereas the ones that were visibly oppressed had to do much more effort.

This activity, combined with some of Dr. Lori’s personal experiences, made apparent the fact that Solidarity, as she said it, “like politics, is social, and arises between people across cultures and borders.” As development students, we always try to apply the critical lens to issues, where we never forget the question: “who is it for?” But despite the importance of the critical approach we tend to undertake, there’s a crucial piece I believe we tend to undermine, and often, disregard.

As mentioned in “the four levels of knowing”, knowing yourself is always the first step to action. If one doesn’t have the reflective skills necessary to understand issues of power and privilege, or the clarity to assume the responsibility we each have towards our community, our countries, and ultimately our world, it becomes increasingly challenging to even understand what others around us need, and what the world as a system, craves. This realization was eye-opening, since it recapitulates what it truly means to “ser solidario.”

In the end, the contradictions will remain. However, as Dr. Lori mentioned, compartmentalizing each issue and each area of our life can lead to even more tensions. Instead of viewing development as a purely academic field and our human sensitivity as isolated, we can connect them and move towards a path where solidarity leads social change. As Keeanga Yamahtta Taylor said, defiance [the refusal to accept the world as it is], combined with information, history, context, and local knowledge can, and hopefully will, change our world challenges to a setting where we work in solidarity and focus on community building.

The Benefits of an IDS Program

Making the next wave of Canadian students more globally minded