U of T Scarborough alumnus Da Chen thought he knew how he wanted to focus his future graduate studies at the University of Toronto.

But after a summer of work in Northern Canada and Chile, Chen (BA, 2017) returned to Scarborough with new insights on how to engage in better city planning and conservation.

“It was a life-changing experience working for Parks Canada,” Chen says. “I made so many life-long friends and the experiences really helped me grow as a person.”

It was after a successful City Studies Co-op placement that Chen went to work with Parks Canada to increase public awareness of Northern Canada and the issues affecting its people.

Through his work with the Parks Canada Northern Engagement Team, Chen worked full-time on outreach projects such as Vancouver Maritime Museum and events like the Vancouver Ocean Film Festival and Canada Day at Canada Place. His job was to teach “urbanites” about the vast Northern National Parks and the culture of Canada.

“I learned so much about the North, from the Inuit culture to the environment to its history,” says Chen, who got to engage with a diverse audience during his time in the role.

Much of that information was gleaned on a two-week Arctic Expedition hosted by the Students on Ice Foundation (SOI). The foundation leads a ship-based hands-on-experience for over 100 youth and educates them on the importance of polar regions and to inspire initiatives that contribute to global sustainability. For two weeks students are led through cross-disciplinary activities by scientists, elders, educators, artists and more.

Jessica Bolduc, one of the 80 educators on board, represented 4Rs Youth Movement, an organization that’s focused on bringing Indigenous and non-Indigenous youth together in dialogue about their shared history and pathways forward for reconciliation. The SOI expedition inspired Jessica to find creative ways to integrate the organization's framework for cross-cultural dialogue into the learning arc of student experiences.

“The traditional Indigenous knowledge that exists regarding sustainable ecosystem management, watching for patterns of climate change and more is so robust within Indigenous communities,” Bolduc says.

“It would be remiss to think that we could ever move forward to combat climate change without Indigenous voices leading these conversations.”

Discussions led by Bolduc on Indigenous identity and what it means to be an ally strongly impacted Chen. Previously a city studies and political science student, Chen has long held an interest in city development and conservation so learning about better ways to improve both situations as an Indigenous ally was of interest to him.

“Hearing from the Inuit Elders and just learning so much from the land, I realized how much of this knowledge is missing from the planning realm,” Chen says.  “I want to help incorporate more ideas and concepts about how Indigenous people engage and manage the land.”

This would be helpful in the environmental management and planning of cities, he says. He hopes to incorporate policies and ways of community engagement in urban issues, but is using his year off to figure out what that will look like.

“Through my master’s program and future career, I hope I can work with others to bring this knowledge back into our cities.”

In addition to the expedition, Chen represented Canada at the 4th International Marine Protected Area Congress (IMPAC4) in Chile as part of the Canadian Delegation. He attended the conference as part of the Students on Ice alumni team, a foundation that educates youth about the importance of the Polar Regions, to support their continued growth and to inspire initiatives that contribute to global sustainability. Chen and a co-worker from Northern Engagement Team attended with sponsorship from Parks Canada.

“In Chile, I was able to learn from world-leading scientists and policy-makers about climate changes and the importance of conservation,” Chen says.

The trip up north and south was the most intensive learning I have ever done in my life, says Chen. Now back in Scarborough, he is taking a few courses at U of T Scarborough before he begins his Master’s of Planning at U of T, but he’s in no way slowing down.

“The experiences I had this year have definitely helped me in getting a better idea and perspective on my next steps,” he says. 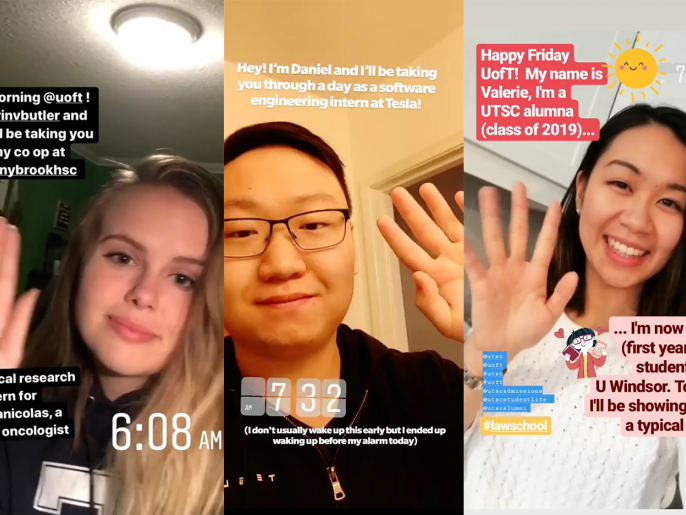 Life As A Co-op Student

What's co-op life like? Learn more about life while on work term, tips for success, and much more.