April 30, 2021 (Toronto, ON)-- The campaign to establish a Chair in Tamil Studies at the University of Toronto Scarborough met its philanthropic goal of $3 million earlier this week, thanks to a little help from some friends. Make that a lot of friends.

More than 3,800 donors gave to the grassroots campaign, which was spearheaded by the Canadian Tamil Congress and Tamil Chair, Inc. in 2018. Since then, individuals, businesses, governments and community organizations have pitched in to realize the dream of bringing Tamil Studies home to U of T. While the bulk of the donors are local to Scarborough and the eastern GTA region, the campaign has also earned international recognition, with philanthropic support arriving from ports as far as France, Australia and Malaysia.

Tamil is among the world’s seven classical languages, with a continuous linguistic and literary history stretching back more than 2,000 years. With 80 million plus speakers, Tamil is one of the most frequently spoken languages in the world. Canada — specifically, the area around the GTA and eastern Toronto where the UTSC campus is based — is home to the largest Tamil community outside of the Indian sub-continent.

The Chair in Tamil Studies represents the first of its kind in Canada, and will be a boon to UTSC’s large and active Tamil-heritage student population, enabling the preservation and memorialization of Tamil culture and language through scholarship, and establishing a focal point for Tamil scholars all over the world to collaborate or pursue higher Tamil studies.

For fourth year Arts student Kanitha Uthayakuma, who has been actively involved in the Tamil Students Association at UTSC, the Tamil Chair and its placement at UTSC is special.

For the chair organizers and many of the campaign supporters, it was a priority to bring the Chair to the University of Toronto, one of the top-ranked schools in the world – and a school that intrinsically values inclusive excellence.

“We are proud to establish a Tamil Chair at Canada's most prestigious university – the University of Toronto – and in particular to its Scarborough Campus, a part of our great city that is home to a large Tamil population. On behalf of the Canadian Tamil Congress and Tamil Chair Inc. we would like to thank each and every donor, volunteer and community group who contributed to this historical initiative,” said Sivan Ilangko, committee chair for the Chair in Tamil Studies, who is also president of the Canadian Tamil Congress and a director of Tamil Chair, Inc.

“I offer my heartfelt congratulations and gratitude to the campaign organizers, volunteers and the countless donors from around the world, whose commitment, determination, perseverance, passion, and belief in the cause enabled us to realize this goal. They have brought to fruition the collective aspiration of the global Tamil community to preserve, grow, and sustain its cultural heritage for the enrichment of the common good,” said Wisdom Tettey, vice-president of the University of Toronto and principal of the University of Toronto Scarborough, in a statement.

“Together with our community partners, we proudly celebrate what has been accomplished through this truly unique exemplar of innovative, inclusive, and participatory university-community mobilization for common purpose,” he added.

Now that the campaign goal has been met, UTSC will begin the work of recruiting the Chair.

DONATE TO THE TAMIL CHAIR

Read this story on what the Tamil Chair means to members of our community.

April 26, 2021 (Toronto, ON) — The SJV and EJ Chelvanayakam Charitable Foundation has donated an incredibly generous gift of $250,000 towards reaching the $3 million fundraising goal needed to establish a Chair in Tamil Studies at the University of Toronto Scarborough.

Spearheaded by the Canadian Tamil Congress and Tamil Chair Inc., the Tamil Chair campaign represents an extraordinary effort by the Tamil community to bring Tamil Studies to one of the most prestigious universities in the world.

Tamil is among the world’s seven classical languages, with a continuous linguistic and literary history stretching back more than 2,000 years. With 80 million plus speakers, Tamil is one of the most frequently spoken languages in the world. Canada — specifically, the area around the GTA and eastern Toronto where the UTSC campus is based — is home to the largest Tamil community outside of the Indian sub-continent.

“The Chelvanayakam Charitable Foundation is pleased to support the initiative to establish a Chair in Tamil Studies at the University of Toronto. As one of the oldest living languages, and one with a rich literary and historical heritage, it is fitting that the Tamil language will be recognized in Canada by the establishment of an academic Chair at the University of Toronto,” said Malliha Wilson, a member of the SJV Chelvanayakam family.

The SJV and EJ Chelvanayakam Charitable Foundation was established in memory of Mr. SJV Chelvanayakam and his wife. The Foundation has been an important ally to non-profit Organisation for Elangai Refugees Rehabilitation India (OfERR), which assists Sri Lankan Tamil refugees living in Indian refugee camps. In addition to facilitating the provision of electricity and clean water to the camps, the Foundation helps to empower women in the camps to obtain employment. It also facilitates the provision of education to the camps’ children. The Foundation has also been instrumental in obtaining documentation (birth certificates and identification cards) for Tamil refugees, and has built the SJV Chelvanayakam auditorium in Jaffna, Sri Lanka.

A vital and beloved politician in Sri Lankan Tamil history, SJV Chelvanayakam is a well-known figure to the University of Toronto Scarborough. The UTSC Library proudly hosts a collection of SJV Chelvanayakam’s private papers, recently gifted by his daughter Susili Wilson and his granddaughter Malliha Wilson, which documents the systematic minoritization of Tamils in Sri Lanka from the 1950s through the 1970s and represents a vital piece of Tamil heritage.

“We are touched by the significant contribution from the Chelvanayakam Charitable Foundation to the Tamil Chair initiative. The Foundation’s donation will have profound impact on realizing our goal of creating a Tamil Chair at the University of Toronto,” said Sivan Ilangko, committee chair for the Chair in Tamil Studies at the University Toronto Scarborough who is also president of the Canadian Tamil Congress and a director of Tamil Chair Inc.

“On behalf of the University of Toronto Scarborough, I offer the SJV and EJ Chelvanayakam Charitable Foundation my heartfelt thanks for this incredibly generous gift,” said Wisdom Tettey, UTSC principal and vice-president, in a statement.

“The gift helps to strengthen Tamil Studies at UTSC, as it allows us to augment work that has already begun with the donation of SJV Chelvanayakam’s papers to our University Library. The Foundation’s support will also facilitate more extensive engagement with Tamil culture and communities, thereby giving concrete expression to our core priority of inspiring inclusive excellence through high quality education, research, and creative activities,” he added.

In June 2018, the University of Toronto, Tamil Chair Inc., and the Canadian Tamil Congress came together to launch an initiative that would formalize the study of Tamil, one of the world’s major languages, and create a Chair in Tamil studies at the University of Toronto Scarborough. Since then, the partnership has raised an impressive $1.36 million towards the $3 million endowment goal.

On the occasion of the second anniversary of the launch of this initiative, we recognize the incredible efforts of members of the Tamil community in Canada, the U.S., Australia, Europe, India and Sri Lanka which have resulted in over 1,200 donations. These donations are a testament to the collective commitment of the diaspora to honour Tamil language, culture and history while strengthening scholarship and teaching in the field of Tamil Studies.

As a major academic centre representing many different cultures and regions, and their corresponding research interests, U of T Scarborough promotes inclusive excellence, diversity and intellectual vitality.  The university’s commitment to supporting one of the world’s seven classical languages through this partnership is a reflection of this mission.

As we look to the future, we will continue to work towards the goal of realizing a full-time Chair. The dedication thus far, is a result of efforts that are a testament to the importance of language preservation and the literary tradition of the Tamil language, as well as the merits of the scholarly depth that U of T can provide.

We are honoured and inspired by the passion and dedication shown by our supporters so far, and we are confident that we can continue to count on them as we welcome new champions to the cause. We know that together, we will achieve the goal we set for ourselves a couple of years ago, which is to have an endowed Chair. Getting to this outcome as soon as possible will expedite our efforts to preserve Tamil language, culture and literary traditions, and to enrich our knowledge of them, through scholarship, teaching, and community engagement.

Learn more and donate towards the Tamil Chair initiative and read about the leaders at the forefront of it. 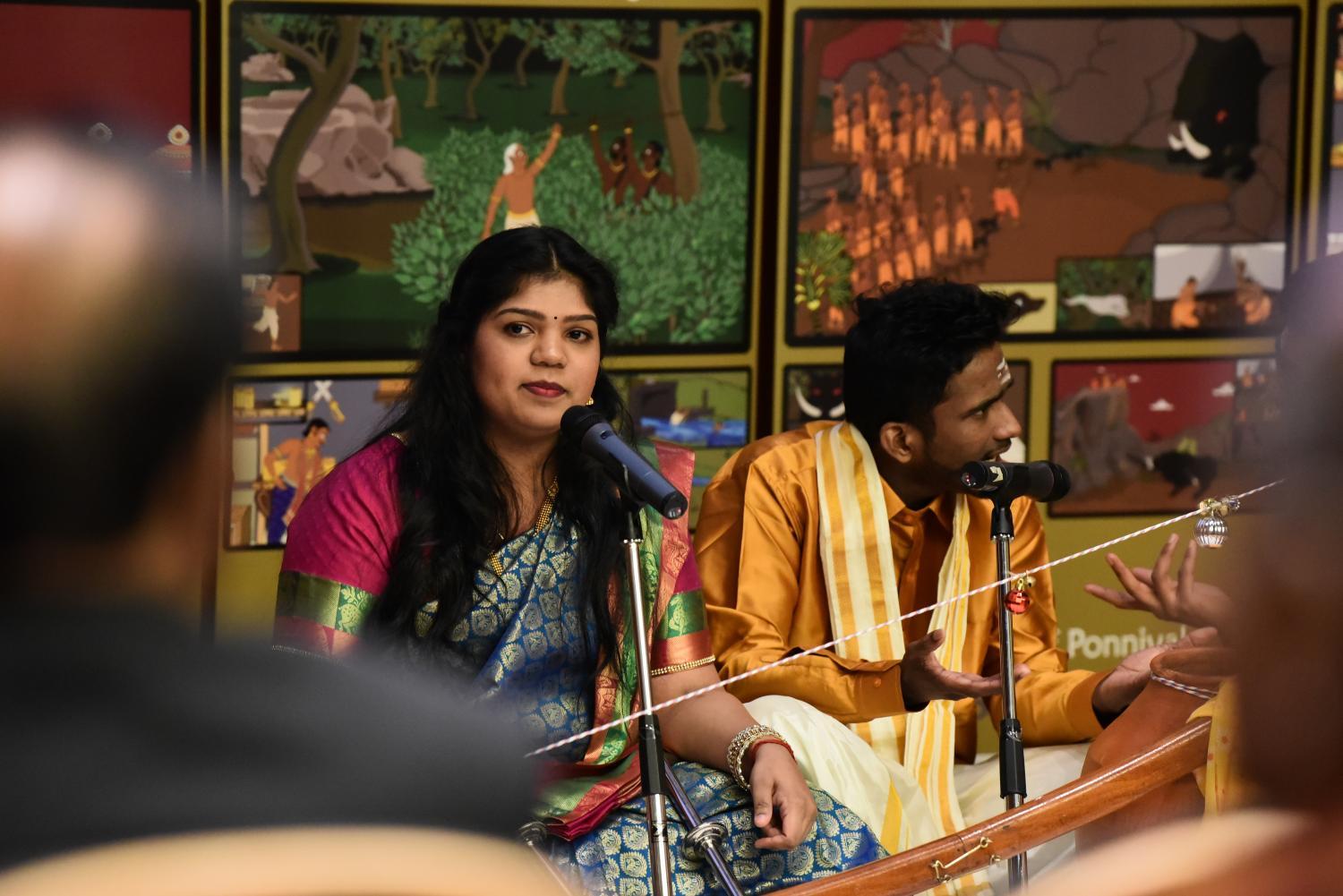